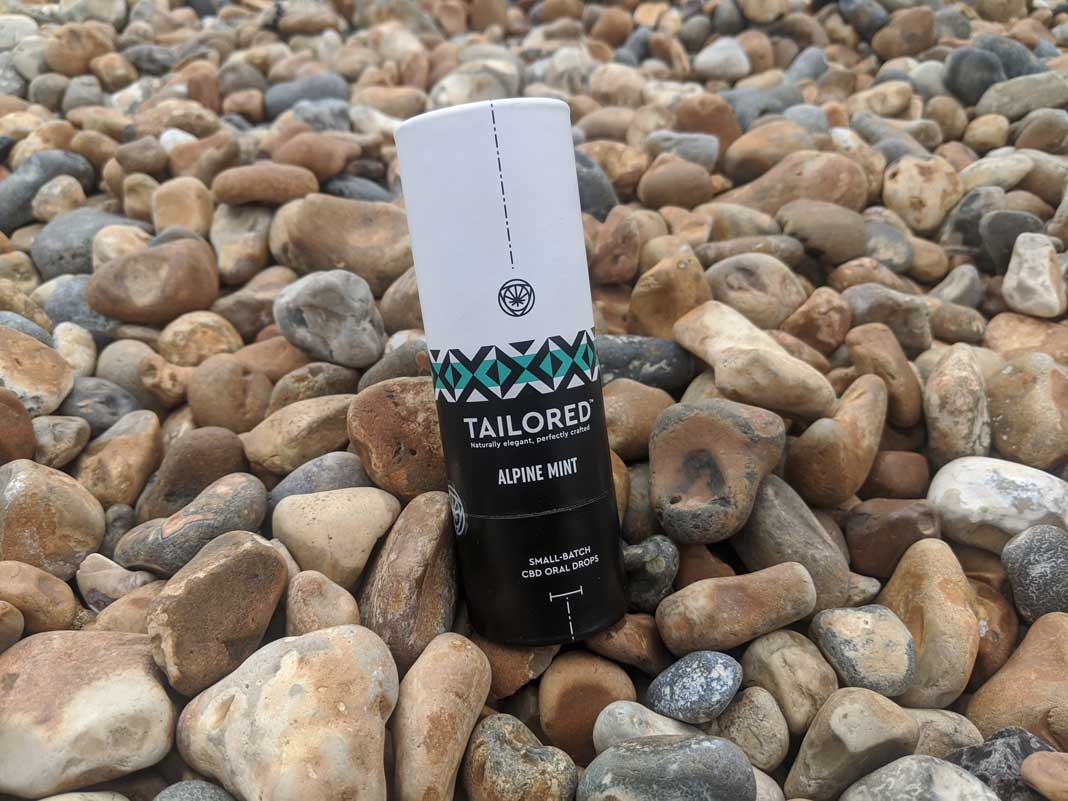 This is number five and the final CBD oil by Tailored Wellbeing I’m reviewing, following on from the Cherry Drops, Tropical Daze, Electric Lemon and Berry Bliss. Today I’m trying the Alpine Mint in a 30ml bottle.

How Did It Taste?

I’ll be honest, I’m not a mint fan, therefore I dragged my girlfriend into trying it, as I didn’t want my bias against mint flavours to offer a negative factor.

She’s a big mint fan and loved the taste of it, calmer than some of the peppermint options, but it was actually one of her favourites.

I have to admit it was quite refreshing tasting, but I’ll certainly be sticking to the berry bliss personally.

What Does The Certificate Of Analysis Show?

Conducted in January 2020, the Alpine Mint CBD oil contained just over the highlighted mark, with 1,002.35 mg of CBD. As you can imagine with a non-isolated product, there are a number of other cannabinoids, terpenes and flavonoids present to help you benefit from the entourage effect.

Unfortunately the test doesn’t cover the exact quantities of terpenes, which is often interesting to read, but they state on their website that you’ll find Alpha-Pinene, Linalool, Delta-3-Carene, Terpineol, Beta-Caryophyllene, Limonene and Humulene present in the Alpine Mint CBD oil.

It should be stated that this product is free from THC (according to their website), making it a broad spectrum oil, useful if you’re drug tested.

How Much Do I Take?

The pipette comes with clear markings to show the measurements, while the brand recommends a 1ml drop each day, which works out as 33mg of cannabidiol distillate.

If you’re using CBD oil for the first time then you might not need as much as this, so you could try a half ml, but everyone is different and so many factors can come into play, such as how recently you ate, what you weigh and your tolerance levels.

I like to have a drop in the morning and a bigger drop in the evening 30 minutes before going to sleep.

Is This Oil Psychoactive?

This term is used loosely, as technically CBD is psychoactive, however it’s not psychotoxic, meaning it won’t get you high.

The cannabinoid that gets you high is THC, of which they must have under 0.2% to be legally sold in the UK, of which is such a small amount you simply couldn’t get high. Having said that, they also state ‘this product is free from THC’ on their website, highlighting that at most they will have a mere trace.

Where Can I Buy The Tailored Wellbeing Alpine Mint CBD Oil From?

You can either purchase this in a 10ml or a 30ml bottle from their website. It should be stated that the 1,000mg is on the 30ml bottle, with only 330mg in the 1ml bottle, making it a 3.3% CBD formula. Before you make a purchase, make sure to check out all their other flavours, of which I’ve written full reviews on.