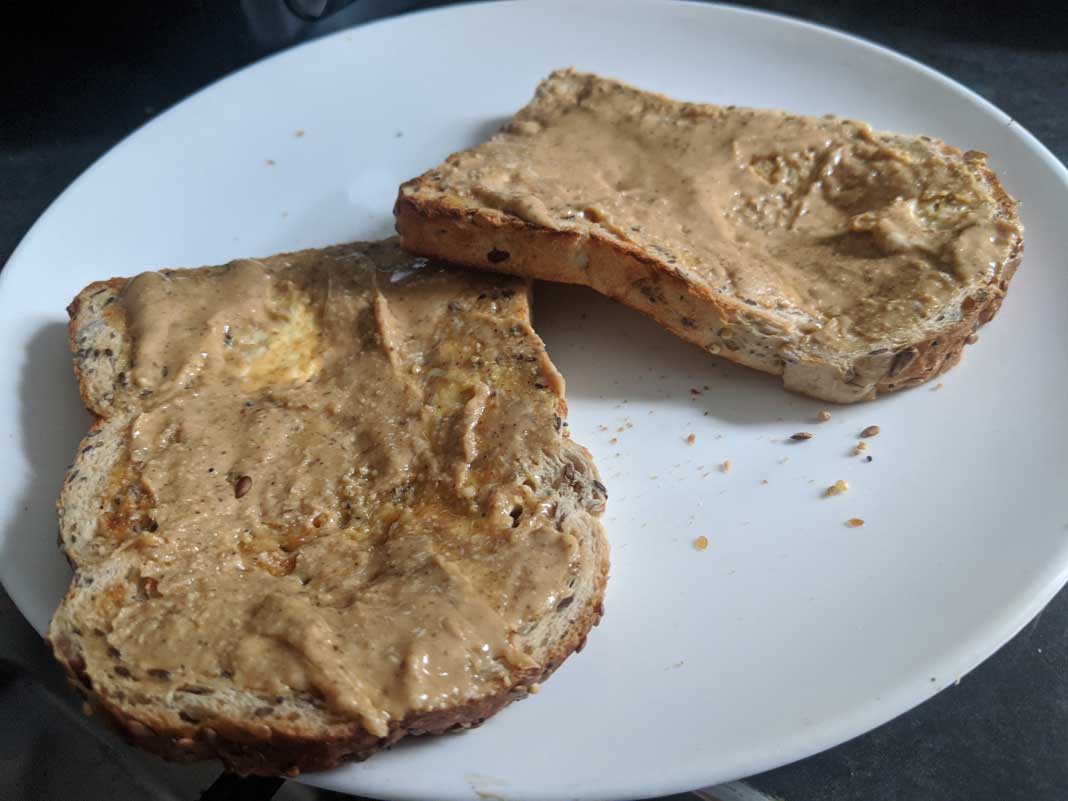 This is the third of four CBD infused nut butters by Naturecan I’m reviewing, following on from the honey sea salt and the milk chocolate nut butter. I did very much like the triple nut flavour, finding it incredibly creamy, making it a close contender for top spot, but I think the honey sea salt might just pip it.

Which Nuts Are Used?

As you would expect with any nut butter, the majority is peanuts, taking up 60% of the ingredients, however 20% is also almond and another 20% is cashews. The cashews add a creamy, smooth texture which I quite liked.

How Much CBD Do You Get?

A 180 gram tub contains 90mg of CBD. I applied mine quite lavishly on two pieces of toast, using around a sixth of the tub (30grams, meaning 15mg of CBD). This is a CBD isolate, meaning you don’t get the other cannabinoids, terpenes and flavonoids present in cannabis, however this is most likely to prevent the flavour from being affected by the presence of the terpenes if they opted for a full spectrum option.

Was It Smooth Or Crunchy?

It was a lovely smooth texture (I’m a smooth, not a crunchy fan). It also spread easily on the toast, while the texture was very much like any other peanut butter, albeit there is a little liquid at the top when you start, so you have to mix it all in before using it.

Almonds are incredibly healthy, packed full of magnesium, vitamin E, fats, fibre and protein. They have also been shown to help lower the bad cholesterol levels, which is increasingly important to myself as I get older. They can also help to lower blood sugar levels, so they’re a diabetics dream.

Vitamin E is a great antioxidant, meaning it can help to fight off free radicals, which cause damage to your DNA and are the main cause of ageing.

Almonds are high in fat, so you can’t have too much, but the important fact is that this is mainly monounsaturated fat rather than saturated fat. Monounsaturated fat actually has many health benefits for your heart. Almonds have been shown to help prevent weight gain, as well improving gut health, which is increasingly important as we become more aware of the gut-brain axis.

Why Include Cashew Nuts?

Cashews are also very high in magnesium, which holds an important role with helping you sleep better at night. I’ve already written about how CBD can help you to sleep, so these are a perfect combination.

Cashew nuts are also high in zinc, which plays a pivotal role in boosting your immune system. I actually take a zinc supplement each day to ensure my immune system remains strong.

They’re also very high in selenium, iron and phosphorous, not to mention protein and phytochemicals. Cashews are linked to weight loss, but only if you eat a small portion per day, as they are quite high in calories. The triple nut butter is very moreish, so you do have to be careful you don’t eat too much, I could very easily have scoffed down more!

Where Can I Buy This From?

You can purchase the Naturecan CBD infused triple nut butter from their website, while you might want to have a look at their other nut butters before making your final decision.